Researchers from the University of Turku in Finland found that the rotation axis of a[{” attribute=””>black hole in a binary system is tilted more than 40 degrees relative to the axis of stellar orbit. The finding challenges current theoretical models of black hole formation.

The observation by the researchers from Tuorla Observatory in Finland is the first reliable measurement that shows a large difference between the axis of rotation of a black hole and the axis of a binary system orbit. The difference between the axes measured by the researchers in a binary star system called MAXI J1820+070 was more than 40 degrees. 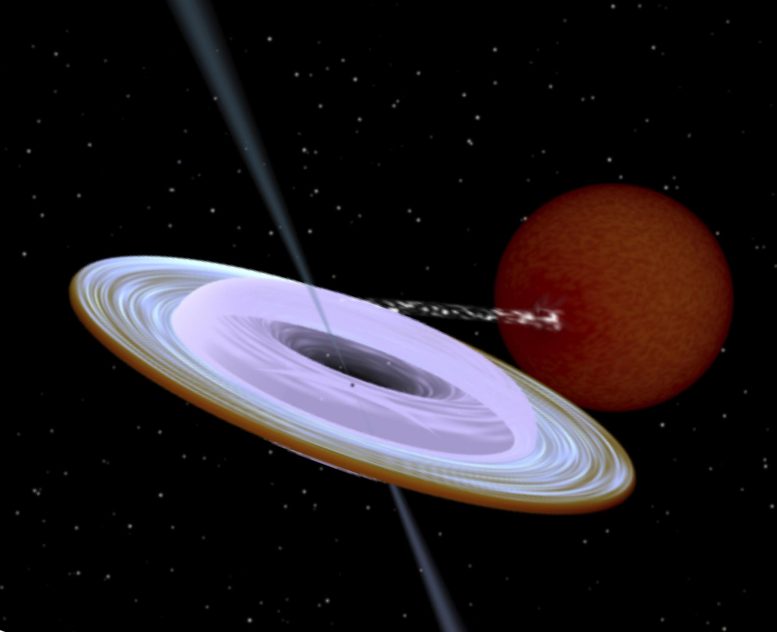 Artist impression of the X-ray binary system MAXI J1820+070 containing a black hole (small black dot at the center of the gaseous disk) and a companion star. A narrow jet is directed along the black hole spin axis, which is strongly misaligned from the rotation axis of the orbit. Image produced with Binsim. Credit: R. Hynes

Often for the space systems with smaller objects orbiting around the central massive body, the own rotation axis of this body is to a high degree aligned with the rotation axis of its satellites. This is true also for our solar system: the planets orbit around the Sun in a plane, which roughly coincides with the equatorial plane of the Sun. The inclination of the Sun rotation axis with respect to orbital axis of the Earth is only seven degrees.

“The expectation of alignment, to a large degree, does not hold for the bizarre objects such as black hole X-ray binaries. The black holes in these systems were formed as a result of a cosmic cataclysm – the collapse of a massive star. Now we see the black hole dragging matter from the nearby, lighter companion star orbiting around it. We see bright optical and X-ray radiation as the last sigh of the infalling material, and also radio emission from the relativistic jets expelled from the system,” says Juri Poutanen, Professor of Astronomy at the University of Turku and the lead author of the publication.

By following these jets, the researchers were able to determine the direction of the black hole’s rotation axis very precisely. When the amount of gas falling from the companion star into the black hole later began to decrease, the temperature of the system cooled, and a large portion of the light in the system came from the companion star. In this way, the researchers were able to measure the inclination of the orbit using spectroscopic techniques, and this roughly coincided with the inclination of the ballistics.

“To determine the 3D orientation of the orbit, one also needs to know the position angle of the system in the sky, which means how the system rotates with respect to the direction north in the sky. This was measured using polarimetry techniques,” says Juri Potanin.

The difference of more than 40 degrees between the orbital axis and the rotation of the black hole was completely unexpected. Scientists often assumed that this difference was very small when they modeled the behavior of matter in a curved timespace around a black hole. Existing models are already complex, and now the new findings are forcing us to add a new dimension to it,” Potanin says.

The main result was made using the in-house built DIPol-UF polarimeter installed in the Northern Optical Telescope, jointly owned by the University of Turku with Aarhus University in Denmark.