Apple is exploring the possibility of integrating a fully functional Mac into a keyboard, reminiscent of home computers of the 1980s, such as the Commodore 64 and Sinclair ZX Spectrum.

The concept was revealed by the US Patent and Trademark Office in a new patent application for Apple called “the computer in the input device,‘ which describes a thick Magic Keyboard-style chassis with ‘all the components of a high-performance PC’ built under the hood.

The patent describes such a device, which can be connected to a separate external monitor via a single I/O port designed to receive both data and power, and be paired wirelessly with a trackpad or mouse for additional input.

Although portable computing devices, such as laptops and tablets, can be docked in an office or home office station that includes a secondary display to provide a computing experience similar to that of desktop computing, these devices still require an additional set of hardware inputs to mimic a computer desktop. Furthermore, the primary display of devices such as laptops and tablets may not be used as often when the device is docked to a station that includes a secondary display, adding unnecessary size and cost to these portable computing devices.

The computing devices described here can include or otherwise contain one or more computing components within an input device to provide a mobile desktop computing experience anywhere with one or more computer screens. For example, a user can move a keyboard that contains a computer, rather than carrying an entire laptop or a tower and keyboard. Because some form of input device is often required to interact or interact with a computer, including computing components within a housing or input device enclosure can eliminate the need for redundant sets of input devices and reduce the number of components that need to be moved by the user. Furthermore, the input device can eliminate additional components such as displays, which are not required when used with a stand-alone computer monitor, thus reducing costs and size.

By including computing components in the keyboard, Apple suggests that this could allow the user to carry a single device that could provide a desktop computing experience anywhere with one or more external monitors.

See also  The Witcher 3 Next-Gen Update includes some tweaks, and cracks others 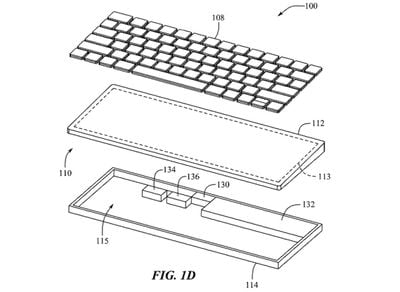 The rest of the patents explore in detail the various configurations of internal computer components within the space provided by the keyboard chassis.

Apple introduced Patents for keyboards In the past, including those using a touch screen panel similar to the Touch Bar Extends to the entire keyboard layoutBut this is the first patent that proposes incorporating a computer into the keyboard itself.

As with any registered patent, the technology is unlikely to appear in any product soon, if at all, but it does provide an interesting insight into how Apple is thinking about Mac designs that could eventually be replaced or offered alongside with Mac miniwhich allows users to bring up their own screen, keyboard, and mouse.

(Across Obviously the apple.)